For the fifth publication, the composer Sébastien Roux will be present at the Sadi-Carnot Stadium from the 28th May to the 15th June 2018, and there will a public restitution Thursday 14th June 2018 at 7:00 pm.

The composer Sébastien Roux has been invited to contribute to this research with the notion of the landmark and his own personal work which involves the translation and transposition of spatial and pictorial figures (like the anamorphoses or the walldrawings by Sol Lewitt), along with spatialized music. The art historian, theorist and exhibition curator Daniele Balit will develop with Sébastien Roux a dynamic exchange around a reflexion on contextual music and forms of anamorphosis.

«The landmark is the form (punctual and recurrent) constituted by the contradictory notions of tracing and palimpsest. The layer shows things in transparency while the palimpsest is working the recovery, the opaque rendering. While allowing to consider the cohabitation of these contradictions, the dance gives body to a third (not necessarily visible) whose landmark is the lure. The landmark is thus a tangible form, a figure, repeated that allows the appearance of a past (space + time) located on a previous layer. Layer after layer, the figure of the landmark allows us to literally pierce the thickness of time and space in round trips to the present. The landmark is distinguished from the trace in that it is from the register of the point while the trace is associated with that of the flow». 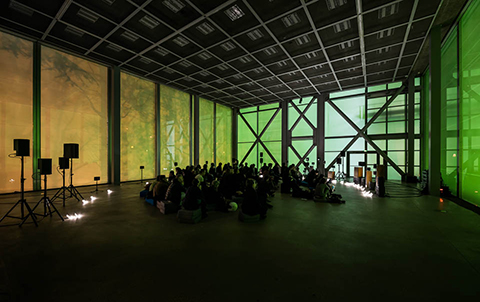 Sébastien Roux, born in 1977, is a composer. He composes experimental music for records, listening sessions, installations, sound experiences or radiophonic work. He works around questions of hearing, sound space and composition stemming from formal constraints. Since 2011, he has developed an approach based on the principle of sound translation, which consists in using a pre-existing work (visual, musical or literary) as a partition for a new sound piece. This procedure gave rise to Quatuor, an electro-acoustic score after the 10th Quatuor by Beethoven and Nouvelle, a radiophonic piece based on the Legend of Saint Julien l'Hospitalier by Flaubert. The most recent development in this process of translation is Inevitable Music, the undertaking of which aims to use the rules and techniques of the walldrawings by Sol Lewitt to obtain sound. Sébastien Roux regularly collaborates with artists from different disciplines. He works with the author Célia Houdart and the scenographer Olivier Vadrot on transdisciplinary projects and on the in situ. He has also made sound environments for many choreographic pieces by DD Dorvillier, Rémy Héritier and Sylvain Prunenec. He has won commissions and residencies from EMPAC (USA), from Deutschlandradio Kultur, the WDR (Westdeutscher Rundfunk), from ZKM (Zentrim für Kunst und Medientechnologie), from RSR (Radio Suisse Romande), from the GRM (Groupe of Musical Research), from the Scène Nationale de Montbelliard, from the Muse en Circuit – Centre National de Création Musicale, from CESARE – CNCM, from the GMEM (Groupe de Misique Expérimental de Marseille) – CNCM and the GMEA – CNCM Albi. He was laureat of the Villa Medicis hors-les-murs (USA, 2012) and of the art radiophonic competition of La Muse en Circuit. He was resident at the Villa Médicis in Rome in 2015-2016.

Daniele Balit is an art historian, theorist and curator. Doctorate at the University Paris 1 - Panthéon-Sorbonne, he teaches history of art at the Institut Supérieur des Beaux-Arts at Besançon and is a visiting lecturer at the University Paris 8, where he is associate lecturer of the laboratory TEAMeD – Theory, Experimentation, Arts, Medias and Design. His research is on audio-visual convergencies in the «post-Cage» period, as well as contextual practices and the in-situ. In 2014, he obtained a grant from the CNAP (support for theory and art crticism) for research on the artist Max Neuhaus of who he is a specialist. Among the articles published are «From Ear to Site – On Discreet Sound» (Leonardo Music Journal, n°23, 2013 – MIT Press) and «For an ecological music – Max Neuhaus» (Critique d'Art n°44, Spring/Summer 2015). He is also co-editor of Les pianos ne poussent pas sur les arbres – Writings and Interviews by Max Neuhaus, an anthology being published at Les presses du réel, coll. Ochetecho. He is a founding member of the curatorial programme 1:1 projects in Rome, of the collective OuUnPoet, and initiator of Birdcage, a temporary  and itinerant gallery involving sound pratice. His recent curatorial projects include : Blow-up (Paris : Jeu de Paume, 2012), No Music was Playing (Montreuil : Instants Chavirés – Brasserie Bouchoule, 2014), Red Swan Hotel (Rome : MACRO, 2015), Wetlands Hero (Chatou : Cneai, 2015), Max Feed, oeuvre et héritage de Max Neuhaus (Besançon : Frac Franche-Comté, 2016) and Max Feed (Besançon : Institut Supérieur de Beaux Arts : 2016), exhibition in two parts, of which he is preparing the catalogue.